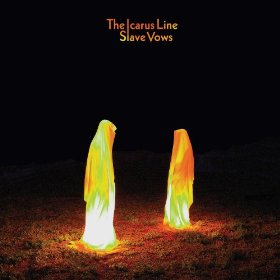 It’s been a long time coming but The Icarus Line are finally realising the potential they’ve shown since 04’s Penance Soiree and have put out an album that could easily be contender for album of the year. Slave Vows is the sound of a band just letting loose and playing discordant rock’n’roll, no fancy tricks just pure rock drenched in feedback that makes the hairs on the back of your neck stand-up. Joe Cardamone has already stated this is a more relaxed record as he’s come to terms with the fact that he’ll be making records for a long time to come, judging by the results, he’s doing something right. It takes balls to open with a 10 minute plus track, and somehow they’ve managed to take some of the best influences you can, Spiritualized, Primal Scream, The Stooges and distil these into a record that rivals all of the above, and I say that knowing full well how great those bands are/were.


As always The Icarus Line don’t release a collection of songs, they have and likely will always release albums, albums that you need to listen to the whole way through, albums that you want to listen to again as soon as they’ve finished. So from the slow build-up of ‘Dark Circles’ through the mental spazz out on ‘Marathon Man’ ending with the offensively beautiful ‘Rats Ass’ there’s not a dud track here, and unless something amazing gets released in the second half of 2013, I’ve found my album of the year.